On the back of this picture it says

"To Mamma from her daughter and grand daughters.  Fannie  ?rew

This picture was given to the Hickman County Historical Society with the following caption.  "After the Civil War the government built a Veterans Hotel at Columbus.  This maybe the picture that has been called a hospital.  Not sure of the exact location but the hills at the back is the bluff and the front is facing the river.  The north abandoned operations in about 1868."

Does anybody have any other information of about the Veterans Hotel ?  We would like to more information about this structure.  Any help would be appreciated. 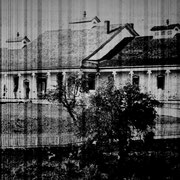 We know that this is Main Street in old Columbus, but can anyone tell us any of the names of the stores seen in the picture?  Any info on the businesses of old Columbus would be most appreciated!!

PARENTS WERE TURNER AND LOUISA HORNE

Anna Orilla Cook "Auntie Cook" (1827-1898) spinster daughter of William Cook (1782-1829) and Elizabeth Rose Cook (1796-1863).  Auntie Cook was the family matriarch, prompted perhaps by her own widowed mother who survived her spouse by 34 years.  Auntie Cook owned (inherited)? at least 3 farms in what is now Hickman County.  In the 1860 Census, occupants in her and her mother's home included three (her elder sister's, Mary Elizabeth Cook Sublett's) children.  Auntie Cook raised her great-niece, Jensie cook after the death of her mother (Margaret Jane James Cook, first wife of John Briscoe Cook.  Auntie Cook's house and contents burned in 1894.  Some years later, she was brought to Muskogee, Indian Territory, staying with her niece, Ella Cook Brewer (sister of John Briscoe Cook).  Margaret Ella Cook, eldest daughter of John Briscoe Cook) a great niece, assisted in caring for Auntie Cook in her final days of life.  Upon her death, her body was returned to Columbus for burial.   This was written on back of the picture when given to the Historical Society.

Open phone camera and scan to donate. Help us keep our history alive.

﻿Family Genealogy and History is our Goal﻿

We have research material from other counties in Kentucky, Tennessee, Georgia, Missouri, Illinois and several other states.

We have a lot more research material and pictures. We are always looking for any old pictures and old records of any type to put in our records.

We are open by appointment only right now just contact us by email to set up. We will try to accomadate any time or time. Thank you

More to come later . The store is up  to purchase books. We will have more info at a later date. If you have any questions please send us an email and we will try to answer. We are open by appointment. We can open for anybody just about anytime just contact us and set an appointment.

Many interesting facts about one's ancestors can be found when researching your family.

During the research of my great-grandmother, Mary Virginia Farrow, I discovered that she was left an orphan.  My Mother did not know this about her grandmother.  I also found out that Mary never got to see her father because he died before she was born.

Mary Virginia Farrow was born on May 4, 1864.  Her parents were Jesse Farrow and Eliza Richardson Farrow.  Her father was in the Civil War but did not survive the armed conflict for he died in February, 1864, just about three months before she was born.

I discovered, during my research that after her father died, her mother turned her over to the courts when she was about one year old because she could not care for her.

Mary lived in the Samuel Hall home for about six years then she went to the Richard Slatton home for about the next ten years.  She married her husband, Wiley Denton, in 1882.  They were married for sixty years and had three girls and two boys born to this union.